Last week was another big week in the global financial markets. Locally, the Australian market clawed back all of the losses from last Friday to rise by the most in 40 years. The index surged late in Monday’s trade, led by a spike in consumer-sensitive stocks as the government signalled it would do whatever it takes to save the economy. This is mainly attributable to the announcement of the Federal Government’s Job Keeper policy[1].

Significant new policy stimulus around the world has been announced:

China has said that the new cases of COVID-19 they are seeing are from overseas visitors. This has prompted a ban on all visitors coming into China. Beijing is encouraging people to get back to work with early indications suggesting that China is operating at around 50-75% of capacity[2]. China needs to see around 90% of capacity being used in order to get meaningful GDP growth.

The not so good news

Chart 1 shows financial markets performed better last week, with equities around the world rallying in response to the stimulus measures being announced. This looks more like a relief rally reflecting the markets’ state of mind. Despite last week’s rally, equity markets are still well below where they were in mid-February – see Chart 2. 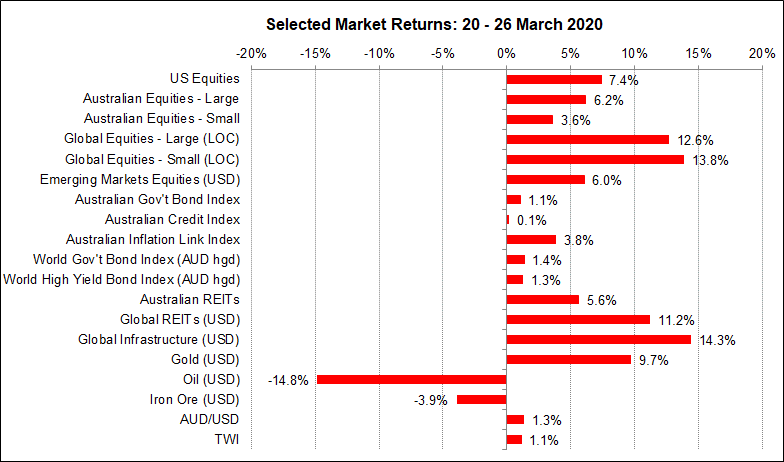 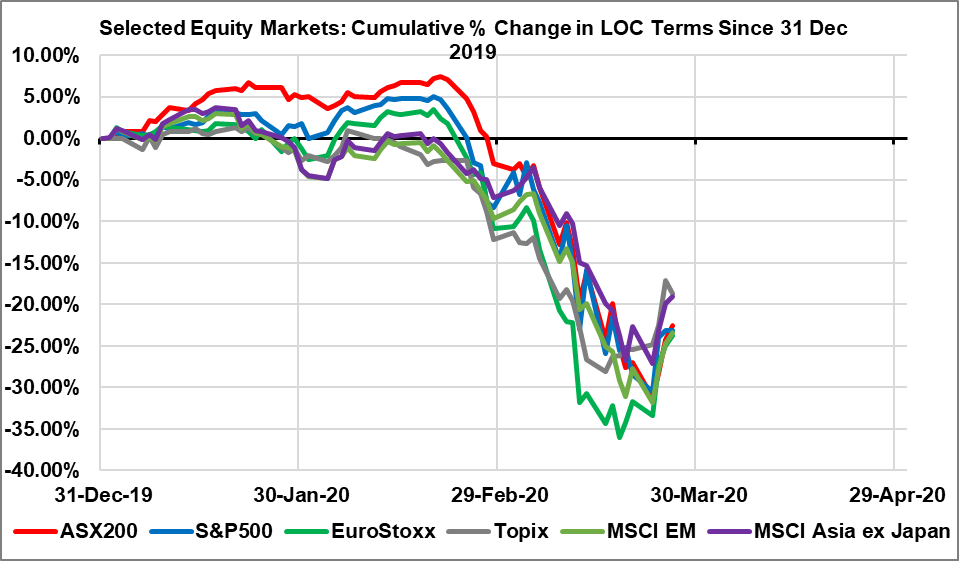 It is still too soon to know if the stimulus packages being announced around the world are going to be enough, especially since the virus has not yet peaked. There have been suggestions that some of the rally in the US was due to Trump saying they will be open for Easter[8] – a highly unrealistic ambition. According to the Atlanta Federal Reserve, “at present, we simply don’t know the extent of the overall disruption to the economy. We are still months away from confidently gauging COVID-19’s impact”

In this environment, a continued focus on capital preservation is key. Whilst markets are a long way from being out of the woods, green shoots are emerging in some segments[9]. However, the future is still too uncertain for anyone to make a statement that markets are “risk-on”[10]. We will continue to monitor the situation very closely. When the time comes for a more positive stance on risk assets, the defensive measures currently in place will be assessed for potential unwinding.

This document and its contents are general in nature and do not constitute or convey personal advice. It has been prepared without consideration of anyone’s financial situation, needs or financial objectives. Formal advice should be sought before acting on the areas discussed. This document is a private communication and is not intended for public circulation other than to authorised representatives of the Madison Financial Group and their clients. The authors and distributors of this document accept no liability for any loss or damage suffered by any person as a result of that person, or any other person, placing any reliance on the contents of this document.

Information contained within this website is general advice only. We have not taken into consideration any individual circumstances and suggest that no person act on the basis of this information without obtaining professional advice as to how it applies to their own personal circumstances. All content appearing on this website is proprietary, copyrighted and owned or licensed by Nexus Private Wealth Management. Any unauthorised use of content from this website is strictly prohibited. All rights reserved.

Enter your details for one of our support staff to call you to book in a consultation.